I ran into two old friends in Ten Sleep the weekend before last.  BJ Tilden and Kyle Elmquist were on a quest to send some of the harder lines the canyon has to offer.  They asked me to come along with them and their friend Tom and we had a great day at the Superratic and French Cattle Ranch.  They were resting the following day so I talked them into hiking in to see a new crag I have been working on, Crag 6.  I convinced them to bring harnesses to belay me but couldn't get them to bring their shoes, it was their rest day after all and bringing a pair of shoes usually means you will climb.

I have spent two seasons putting routes in at this remote crag and like so many random crags dotting the vast Big Horn Mountains, this one is a real gem.  Needless to say I was eager to show off my find and try to send something.  There are nearly 20 routes there now and with some 10's from Charlie K, some 11s and 12s from JB to compliment the 13s I installed, we now have a crag stacked with three star climbs.  I was asked to keep this crag a secret even though I stumbled upon it first and started the process of development.  I agreed and we laid down some ground rules, 'no topos and no directions posted on the internet', though bringing friends in for a day of climbing was allowed.

Many of the routes I put up are very hard for me and I knew they would each take serious effort for me to ever be able to redpoint.  Consequently I have given several away and was psyched to see the rest sent as well.  When I finish a new route, I always climb it to see what its like and then determine if I am ready to start projecting it or move on.  Crag 6 has two premier walls, one really long with endurance related routes and a shorter wall with bouldery routes.  I chose a route on each wall to save for myself.  BJ and Kyle were very impressed with all the routes and decided to come back the following weekend.

Our crew consisted of myself, BJ, Kyle and his lady friend Julie. In addition, Casper sent along two envoys, Micah and Eric to round us out at 6.  After warming up on the incredible long 5.11s, the Casper guys set to work on Special Delivery .12c, an enduro steep arete on the far right side of the Rap Stars Wall. 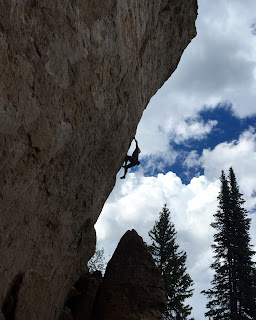 
BJ onsighted and Kyle flashed the long brilliant Deez Nutz .13a for seemingly a second warmup. Then Kyle, BJ and I went to work on some of the shorter bouldery routes.  I sent Bo Cleevil .13b for the FA on my second try of the day after climbing through the hard stuff and bungling an easy move up high on first go.  BJ went right to work on the steep blunt arete and after a quick recon sent it on his second try,  he dubbed it Godfather FUZ .13c.  He then went on to flash Bo Cleevil and its sister route High Park Rodeo .13b for the FA. 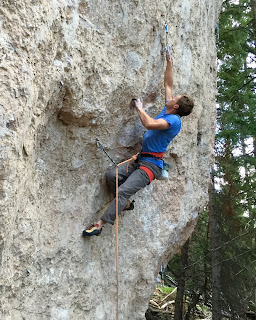 Kyle Elmquist on Bo Cleevil .13b 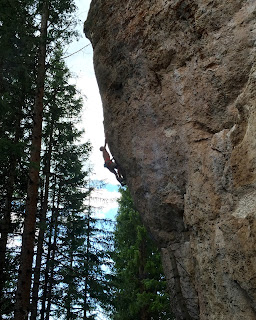 BJ Tilden getting the FA on Godfather FUZ .13c

The second day we swapped the Casper guys for some friends from Cody, John M. and Jesse.  BJ flashed Thugagra .13b, the longest and hardest of the enduro Rap Stars routes in impressive style.  He then went on to dissect the Girl Next Door .13c for its second ascent and strung its start into Godfathers finish to create the linkup Girl FUZ .13d.  Kyle and I floundered about on High Park and Bo Cleevil and at the end of the day when we were all thrashed from a weekend of tugging on small pockets, I went to hang draws on Holla, a long pumpy .13-. This being the last unsent route and my next project, I wanted to equip it so I could try it next time I was there.

It never fails to surprise me how I can sometimes perform my best at the end of several days on and this was no different.  I guess it was low expectations for that particular try, I made it through the crux down low and felt good moving through the bigger moves in the middle.  I kept finding the best jugs to rest on and as the route tipped back and the moves and holds got bigger, I just kept going.  I only became nervous about 10 feet from the anchor when I realized I might just pull it off.  I don't normally celebrate when I clip the chains but I couldn't help letting out a "HOLLA!" that echoed across the empty meadows down below.

My cohort in development of this crag JB Haab has always been diligent about enjoying a cold beer directly upon reaching the truck after a long day at the 6.  Having absorbed this lesson well, those beers felt as good going down as they did on my swollen finger tips.

Homeboys and girl grinning ear to ear after a great day at the 6.

I went back the following day and bolted another line and started in on a second one.
Posted by wyclimber at 7:53 PM 2 comments: