Posting has not been a priority lately because I have decided to take a two month rest/break from climbing. I tried this last year around this time and found that 2009 was more productive than any season I can remember in the last decade. I have never really ever stopped climbing for longer than a week in the last 16 years, save for a few injuries that sidelined me. My theory is that while the muscles tend to rebuild and recover quickly, the tendons need more time. I feel all sorts of strange creaks and tweaks during the rest, but I can generally get back up to speed in a few weeks after I resume training and climbing. Also the short days, crap weather and Holiday stuff make climbing outside this time of year a struggle anyway.

I did do something different that was climbing related about a month ago. I managed to snag a job climbing an 80 foot tower and installing radio antennas to enable a local church to broadcast live programs. The existing tower a top McCullough Peaks was already packed full of antennas, wires and dishes, though I did spy a path up the west side that was easily protectable and relatively free of existing equipment. I treated it like any rock climb I've ever done mixed with some rap bolting technique as well. The task involved hauling equipment up, bolting it on the tower, wiring every thing together and strapping it all firmly to the tower. The engineer I worked with told me it would take two days of work and because I generally underestimate the time needed to do anything I set out to do, I wanted to do it in one day. The job was a lot of work though pretty fun at the same time with a killer view to boot. I worked fast but safe and managed to finish in five hours and everything now works as it is supposed to. 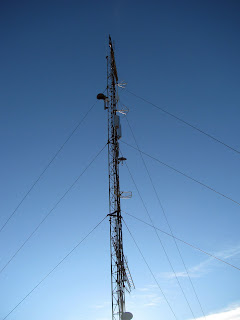 The two arrow-shaped antennas at the top right of the tower are my handy work.

I got Meg a hang board for Christmas. The folks over at So Ill hooked me up with a Blurr board which seems to have great texture and a variety of crimps, jugs, slopers and a pocket or two. I pulled down the old slicker-than-snot Pusher board that we have been greasing around on for years. I built a wooden mount for the new board and screwed on the old Metolius Rock Rings and a couple of Hera Climb for Life crimps to give us some more options. February 1st I'll start training and using it, Meg started immediately.

I was looking at a some old footage I shot years ago on VHS-C and decided to sew together a video of the homies and I working out Finger Paint back in the day. Its not great quality to begin with but I saved it as an AVI file and it looks like hell on Vimeo. Oh well, I 've got nothing new so maybe I'll bore you with more old stuff as I pick through it.