The push for new granite routes in the Lower Canyon continues at a steady rate.  My efforts have been generally concentrated on the Single Malt Wall and the nearby Riverside Wall.  I was itching to move on from the Single Malt Wall to other locales but there was one line that I had been eying during the development of nearly a dozen other routes nearby.  A steep although short fissure splitting the upper wall was an obvious line that I had rappelled over or gawked at while installing other routes.  The problem was I could never touch it because I was always swinging out away from the wall by the time I got a look at it.   I brought gear and bolts for a recon and as is usually the case, this was a future sport route, not a trad or mixed route.  This route takes off from the ledge accessed by La Phroaig .11a, Stranahans .12c, Oban .12b and Glen Morangie .10a so you have your choice of first pitches.  It lies directly above Stranahans so it received the name of Stranahans exclusive once-a-year second casking 'Snowflake'.  Short and wickedly pumpy because of its steepness this little devil checked in at a conservative .12b.  I think climbers would love this route and it would become popular if it started from the ground but as a 2nd pitch route, it probably won't get climbed very often.

A frequent climbing partner, Bryant Hall expressed an interest in bolting and I suggested we update aging hardware on a sorely neglected route at the Island as a way to instruct on the finer points of route equipping.  My good friend, the late Bobby Model, put up Wild Thing .10d in the mid 1990's.  This route has taunted climbers with the threat of a crazy swinging fall from the crux mantle for two decades now and many have walked away with bruised and banged up knees and elbows.  Often after flailing and failing repeatedly climbers will sneak to the right and climb an easier albeit looser option far from the bolt to the right.  I watched it too many times over the years and talked with Bobby before he died about the possibility of splitting this line into two different routes.  He agreed it was an issue but sadly we never got to act on the project before he left us.

The day we chose to attack this project, Bryant led the route and I watched the scenario unfold as I had seen so many times before, a swinging, spinning fall punctuated by doubt and an escape to the right for a scary adventure.  As he shakily scrambled onto the ledge and relative safety, I explained this is what we were here to fix, that and 20 year old rusted hardware.  He then continued up through grass and dirt to the larger ledge and the old chains on the back wall to fix a static line for us.  We each took a side and were able to install two sets of new chains and separate bolt lines preserving but separating the two different experiences, each now well protected with shiny new bolts.  A thorough scrubbing and a new start for each finish produced Mild Thing .9 and Wild Thing .10c, both of which get climbed and enjoyed often now.

As the section of the River Side Wall under the giant chockstone becomes more dense with routes, it will most likely garner its own name differentiating it from the routes around the corner, above the road and closer to the river.  For now its still part of the RSW and has seen the most action this year so far.  I tackled a blank section with a steep red shield at the far left side of the wall near the road to create The Dog Soldier .13a/b.  I have been staring at this piece of wall for a long time trying to decide if it had enough climbable features and wondering how to get over and down to it from above.    In the end it wasn't as bad as thought it would be save for a logistical error caused by bringing a second rope that was too short.  I managed to come up with a solution and cleaned up this wandering little beast.  After getting stymied by the crux on my first try and tugging past it on the quickdraw, I pulled off a seat of my pants ascent on my second go. 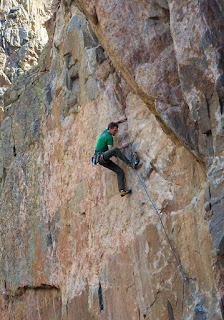 Working through the cruxy section on The Dog Soldier 5.13a/b

Winter Ramos strolled back through town and was interested in checking out the new additions to the canyon along with sending an unfinished project he bolted last year.  We teamed up for 3 days  of climbing and enjoyed a day over in Ten Sleep at the Octagon where we sampled new routes and I was able to flash my first ever .13a, Duke Roofus.  With a good day under our harnesses, we headed back to Cody to try Winters route Craggenmore at the Single Malt Wall.  He rapped in and pre hung the draws to protect a hard clip at the crux.  After a valiant fight he still didn't have a solution for the vicious sloper move, he lowered down and handed me the sharp end.  I was a bit intimidated but eager to try hard, I somehow managed to stick to the slopey rail and climb on to the chains.  Craggenmore .12c is situated above the road starting on a dangerously slanted shelf and though it is weird to get to, it is totally worth the effort.  Our 3rd day found us fighting wind at the Brown Wall where we climbed the long and brilliant Golden Gate .11a, Foxy Brown .12b, I Speak Jive .11b and The Bolus .11b.  I was eager to try the extension on the Bolus as I had tried once last year and realized I needed to scrub it more. After a spirited scrubba-dub last Fall it felt crisp and sticky today and I fired it on my first go. Lower angle but cryptic and powerful, I felt like this short section merits .13a.

Unfinished routes bug me, especially half finished routes or routes with no ending or poor cleaning jobs.  Right in the middle of all the new routes on the River Side Wall was a nearly 25 year old route, started but never finished, literally 4 bolts to nowhere.  A climber/river guide by the name of Marty lived in Cody in the early 90's for a summer.  He aided his way up the wall leaving bolts/hangers, machine bolts threaded into drilled holes and even a copperhead/mashie and ultimately a steel quick link bail biner. There it sat for 20+ years, I had climbed up the large coffin shaped feature to the quick link before so I knew that part worked.  I rapped in and cleaned 50 more feet above, installing chains and 6 more bolts.  I found great rock and more fun climbing, and dubbed it Marty's Coffin .11c.
Posted by wyclimber at 10:09 AM